The Club shall be called the “Stirling and District Camera Club” and membership shall be open to all interested in photography.

2.1 The object of the Club is to further the study and practice of Photography in all its branches.

3.1 There shall be two categories of membership

a) Honorary Member
b) Ordinary Member

3.2 Honorary membership may be proposed and approved by the Club at the Annual General Meeting or Special Meeting.
3.3 Ordinary membership is any person eighteen years of age or over at 1st September in the current session.

4.1 Membership of the Club implies undertaking to comply with these rules.
4.2 The Annual subscription – fixed at the preceding Annual General Meeting – shall be payable within four weeks of application for membership.

5.1 A member not in arrears of subscription may resign at any time by notifying the Secretary.
5.2 Any member whose subscription has not been paid in full three months after joining or renewing their membership of the club will cease to become a member.
5.3 A member may be expelled or asked to resign from the Club at the decision of the Management Committee. The Management Committee can request a member to appear before it, provided that where any accusation or charge is made the member shall be given full and reasonable opportunity to put forward a defence and bring witnesses at a later meeting. Any member expelled or asked to resign shall have the right to appeal to a Special General Meeting called for the purpose.
5.4 All Management Committee Proceedings and those of any Special General Meeting called under rule 5.3 shall be treated as privileged and confidential.

6.1 Members may not participate in any of the Club Competitions unless they have paid the current year’s subscription and any arrears in full.

7.1 The Annual General Meeting of the Club shall be held each year in March or April, notification of which will be specified in the Club syllabus, announced at the preceding meetings and on the Club web site.
7.2 The following business shall be transacted

9.1 A Special Meeting may be called on a request in writing signed by at least four members, stating the object, and sent to the Secretary at least fourteen days before the date proposed. Proposals for such a meeting shall also be announced at any preceding Club meetings and on the Club web site.

9.1 At Management Committee Meetings four members shall form a quorum.
9.2 At any Meeting of the Club, the President shall have a deliberate and casting vote.
9.3 The Secretary shall keep minutes of all Management Committee Meetings and conduct the correspondence of the Club.
9.4 The Treasurer shall collect all subscriptions and monies due after authorisation by the Management Committee. At the close of each Club year, a Balance Sheet shall be drawn up by the Treasurer and audited by a suitably qualified person, approved for this purpose by the Annual General Meeting.
9.5 Any cheques issued from the club account must be signed by two signatories. All such signatories will be appointed by the management committee and registered with the bank.

10.3 All positions to be elected each year at the Annual General Meeting. All office bearers and committee members are eligible for re-election each year with the exception of the President, who shall not be eligible to serve for more than three years consecutively.
10.4 Candidates for election to the Committee shall be proposed by one member and seconded by another and shall indicate their willingness to be considered for election. Such proposition shall be considered at the Annual General Meeting.

12.1 No alteration of, or addition to, these rules shall be made except by the Annual General Meeting, or a Special Meeting called in accordance with rule 9.1

13.1 None of the Club’s assets may be distributed or otherwise applied (on being wound up or at any other time) except to further its charitable purposes.

13.2 In the event of dissolution there remains, after the satisfaction of all its debts and liabilities, any property or funds whatsoever, the same shall not be paid to or distributed among the members of the group but shall be given or transferred to another charitable institution having objects similar to the objects of the Club. 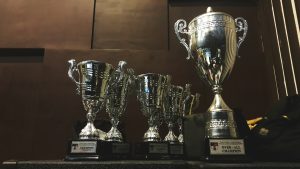